MISSED THE STATE OF THE SCHOOL? CLICK HERE TO VIEW. 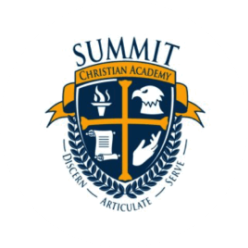 Our Board exists on behalf of parents and other constituents with vested interest in the school to assure that the vision and mission of Summit Christian Academy are being accomplished. All authority resides with the board unless it delegates some to others. The Policy Governance model begins with this assertion and then proceeds to develop other universally applicable principles. Chief among these principles is the concept that the board delegates as a group with one voice. This means individuals do not speak with lone authority as individuals but as members of a group with one voice. They delegate predominantly to the Head of School who determines the means by which the board’s pre-established ends are accomplished. The board then carefully monitors the headmaster’s performance to assure that these ends are being met.

Bob Bryant graduated from the College of William and Mary with a degree in Philosophy and graduated from the University of Maryland University College with a Master of Science degree in Management & Health Care Administration. Bob spent his healthcare career with Riverside Health System, retiring in April, 2016. Bob was then called to the ministry and is completing graduate seminary studies at Regent University School of Divinity, and will graduate in May, 2020. Bob completed Chaplaincy training at Riverside Regional Medical Center and was ordained in Chaplaincy Ministry at Peninsula Community Chapel in November, 2019. Bob currently serves as a Hospice Chaplain and Pastoral Care Counselor at Westminster Cantebury at Home in Virginia Beach, Virginia. Bob serves proudly as a Board Member of Summit Christian Academy, the Lackey Free Clinic, and the Pastoral Advisory Council at Riverside Regional Medical Center. Bob and his wife Carol are members of Peninsula Community Chapel and reside in Yorktown, Virginia. They are blessed with five wonderful children and eight wonderful grand-children.
Bob Campbell serves as President of the Board for Summit Christian Academy. He was born and raised in Philadelphia, PA, where he attended Villanova University and earned his Bachelors in Civil Engineering. He also holds graduate degrees in Environmental Engineering from the University of Illinois, and International Business from St. Louis University. Bob is a member of Peninsula Community Chapel where he has served as a home group leader and on the global ministry team. He founded and leads a consulting firm that provides environmental, health, safety and emergency management solutions for public and private sectors. Over the last 15 years, his firm has served over 2,000 communities in 48 states and 17 countries. Prior to his private sector service, Bob served 10 years as an officer in the United States Air Force. He is married to Dr. Amy Campbell and they have two children – Reagan and Sarah, who have attended SCA.
Floyd Foster has been the Senior Pastor of Agape Life Church since 2013.  Floyd previously served as the Pastor of Gleaning Baptist church from 2000 to 2007.  He and his wife Patrice have four children, two of which attend Summit Christian Academy.  Floyd is also a proud board member at Summit Christian Academy.  His undergraduate studies began at Liberty University and later transitioned to the Master’s University and Seminary.  Lord willing, His graduate studies will begin in August of 2020 at Virginia Beach Theological Seminary, as he pursues a Master’s of Divinity.
​Kevin Francis is a graduate of the University of Virginia where, in 1996, he earned his BS degree in Mechanical Engineering. Kevin and his wife La'Donya were blessed with 3 children who attend Summit.  Kevin supports Summit as a JJV and Varsity Girls Basketball Coach, partner with teachers in his children's education and is a rookie member of the SCA School Board.  Finally, his love of Astrophotography allows him to study the heavens in addition to his study of the word of God.
​Carl Long is serving his second term on the Board and is a former Board Chairman.  He is a USAF Veteran and holds a degree in Information Technology from Saint Leo University and an MBA from the Regent University School of Global Leadership and Entrepreneurship.  He was the Chief Executive Officer of Unity Business Systems for sixteen years.  He and his wife, Melody, have one daughter at Summit.
​Russell Peden rejoined the Board of Directors in 2018 after taking a sabbatical for health reasons. He is a business owner for over 27 years. Russell is a consummate entrepreneur, and enjoys sharing his knowledge and experience with students at SCA. Russell is passionate about Classical Christian Education. He attended California State University-San Bernardino. Russell and his wife Carole have four children at Summit, two teenage daughters at the Upper School, and two children at the Lower School.
​Lindsey Ralls graduated from Summit in 2005. Since graduating, Lindsey has served the school as a teacher, parent, alumni coordinator, and board member. She has served on the board since 2017 and has a heart for classical education. Lindsey has a finance degree from The College of William and Mary and is currently working on a Masters in Curriculum and Instruction. She and her husband John have two children who attend Summit.
Employment Opportunities
Copyright © 2019 Summit Christian Academy. All rights reserved.